The Horse in Premodern European Culture: why horse history matters for Arthurian scholars 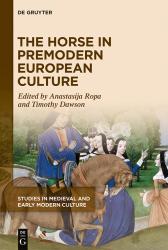 In 2014, I went to the International Medieval Congress in Leeds, with a paper about a minor female character of Arthurian romance, King Solomon’s wife in the Queste del Saint Graal. It was a spin-off one of the chapters in my recently completed doctoral thesis and the first paper I was going to present as a doctor. I was at a loss at what I would be doing next. I had a well-paid job outside the academe, and little idea what to do next in terms of research – or whether I will be able to do any research at all in future.

I did not know it then, but meeting Timothy Dawson at one of the IMC receptions was to be a turning point in my career. An Arthurian scholar and a Byzantinist – what could we talk about? It turned out we had one interest in common: horse history. We agreed that knowing about horse history is essential for any medievalist, because horses were an integral part of medieval life, yet there seemed few recent studies and little interest in medieval equestrian history back then. Ann Hyland’s books were out of date and criticized due to her lack of academic background. Yet there was nothing to replace her comprehensive studies of the medieval horse for a medievalist who wanted a general introduction to the theme.

We decided to counter this challenge by proposing a session on horse history at the next. Actually, with the responses we received to our call for papers, we have been able to organize three interdisciplinary sessions on medieval equestrianism in 2015 and four sessions in 2016. What is more, when I went to Kalamazoo in 2016, I met with Dr Simon Forde, director of the Arc Humanities Press, who suggested publishing a book about the horse in medieval Europe. I did not feel qualified or experienced enough to write a monograph about medieval horses back then, so I proposed an edited volume based mostly on the IMC contributions.

It took me and Timothy nearly four years to complete the book, which is, I believe, good timing, given that it was an innovative venture in English medieval scholarship and the fact the contributions spanned a variety of time periods, regions and disciplines.

We had amazing authors, one of whom was Elina Cotterill, who, like me, has studied Arthurian literature in Bangor University and had Prof Raluca Radulescu as her supervisor. I was thrilled when Elina accepted my invitation to present a paper at the IMC and offered to speak about hippiatric treatises, an important but complicated issue in medieval equestrian history. Elina explained that to me that her interest in hippiatric remedies stems from the early days of her Bangor MPhil, when she started to look at the medieval equestrian context for the Morte D'arthur and discovered a number of hippiatric treatises. She could not dive into these in depth until some years after graduating. Being now based in Oxford, she had all the resources needed to complete such a study, and her article is well-informed, easy to read and fascinating both for literature scholars and for those who are primarily interested in horse history.

Working on the book, we had the good fortune to meet scholars coming from all kinds of backgrounds, some of whom were in early stages of their career, while others were more experienced. I could not believe my eyes when we have received a paper from John Clark, the editor of The Medieval Horse and Its Equipment c. 1150-1450, which is the key book on medieval equestrian history ever since its publication in 1995. Our book included contributions by non-native speakers of English and by those with little experience of writing for academic publication, and several authors were so generous with their time as to review other authors’ papers. John Clark and Elina Cotterill were among the volunteers, and I am very grateful for the commentary on the language and content our author-reviewers have offered.

I hope that our volume would be useful to a wide range of scholars, including Arthurians, because knowing about medieval horses is important for anyone who wants to understand the place of the horse in medieval romance. Moreover, two articles in the volume refer to Arthurian text. The article by Miriam Bibby traces the story of Scottish horses starting from Guillaume le Clerc’s romance of Fregus, where the hero’s horse is presented as an outstanding representative of its type. In my own article about the price and value of the medieval warhorse, I discuss examples from several Arthurian romances, including Sir Gawain and the Green Knight, La Queste del Saint Graal and Thomas Malory’s Le Mort Darthur. Both Miriam’s and my own article are informed by the belief that not only can the study of equestrian history enhance our understanding of Arthurian romance, but also an informed reading of horse-related episodes in Arthurian romance can contribute to our understanding of equine history.

About the book: This volume features approaches to equine studies from disciplines as diverse as archaeology, legal, economic and military history, urban and rural history, art and literature. This volume explores the ubiquitous – and often ambiguous – role of the horse in medieval culture, where it was simultaneously a treasured animal and a means of transport, a military machine and a loyal companion. The contributors, many of whom have practical knowledge of horses, are drawn from established and budding scholars working in their areas of expertise.

About one of the authors: Anastasija Ropa holds a PhD from Bangor University, UK. She is the author of Practical Horsemanship in Medieval Arthurian Romance (Trivent, 2019) and editor of the Rewriting Equestrian History published by Trivent. Currently, she is lecturer at the Latvian Academy of Sport Education, Department of Management and Communication Science.