The Romance of Sir Degrevant

‘The Romance of Sir Degrevant’, Printed by William Morris at the Kelmscott Press, Hammersmith, 1896. This is one of only 350 original copies made on paper with 8 copies on vellum. The Frontispiece was designed by Edward Burne-Jones and engraved by W.H. Hooper. The printing type is Chaucer Type printed on hand-made paper which holds the second version of the Primrose watermark. 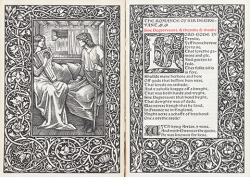 Much of William Morris’ own writing, its subjects and style were inspired by his love of medieval literature.  These could be found in the illustrated manuscripts and printed tomes of Early Modern Europe. Not surprising therefore that he chose to publish this tale. Sire Degrevaunt is a medieval romance composed circa 1440.  It survives in two manuscript versions; MS 91 at the Lincoln Cathedral Library (a collection of texts assembled by Robert Thornton) and Ff.i.6 at Cambridge University Library (an anthology compiled by the Findern family of Derbyshire and their friends)

This Middle English romance much admired for its realism and plot is written in the form of a tail-rhyme stanza. The love story follows the endeavours of a young knight Degrevant, to prove that he is worthy of the hand of his beloved Melidor, the daughter of a neighbouring Earl, whom he has fallen out with over a dispute on hunting. The indifferent maid rejects the young knight’s initial approaches and Degrevant is obliged to seek the help of her lady's maid who has romantic designs on his squire. However, in the meantime the Earl pledges his daughters' hand to the Duke of Gerle who arranges a tournament in Melidor’s honour at which he intends to slay his rival in love. Unfortunately for Duke Gerle, Degrevant twice unhorses him, much to the merriment of Melidor whose mockery leads to the Dukes humiliated departure. Degrevant uses a secret entrance, previously shown him by the maid, to gain access to Melido’r chamber at which point she admits her love for him and they plight their troths but she refuses to consummate the relationship until after their marriage. 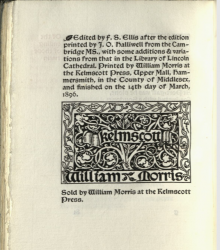 For nine months the young knight courts his love by visiting her chambers every night until their assignation is discovered. This leads to a bloody battle with losses of life on both sides.  The enraged Earl is eventually persuaded by his wife the Countess to allow the marriage which sees the Knight and the Earl reconciled and leads to the star-crossed lover’s happy ending.

This hand-crafted book created as an artistic rather than a commercial endeavour by William Morris at his Kelmscott Press was produced in small runs making it a coveted collector's item. The Kelmscotte Press was the most famous and celebrated of the private presses.  The term "private press" is often used to refer to a movement in book production which flourished around the turn of the 20th century under the influence of the scholar-artisans William Morris, Sir Emery Walker and their followers. The movement is often considered to have begun with the founding of William Morris' Kelmscott Press in 1890, following a lecture on printing given by Walker at the Arts and Crafts Exhibition Society in November 1888. The mainstay of the movement concerned a return to creating books by traditional printing and binding methods, with an emphasis on the book as a work of art on the manual skill involved in their production. A departure from the cheap mass-produced books of the industrial revolution.  Morris was greatly influenced by medieval printed books and the 'Kelmscott style' influenced later private presses. The books were made with high-quality materials (handmade paper, traditional inks and, in some cases, specially designed typefaces), and were often bound by hand.

This copy is part of the Flintshir Harries Collection which can be found in the Centre for Arthurian Studies at the Main Library.